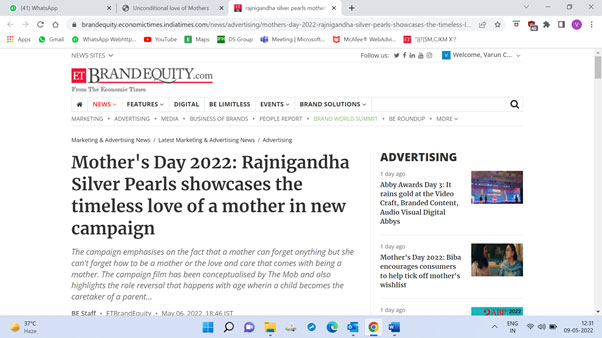 The campaign film narrates the story of a woman who has lost most of her memories due to old age. Her son comes to visit her and she is unable to recognise him. He gets a call that troubles him and she immediately remembers how she used to comfort her son and does the same to this man she doesn't recognise. It visualises the limitless love of a mother. The campaign film has been conceptualised by The Mob and also highlights the role reversal that happens with age wherin a child becomes the caretaker of a parent.

Speaking on the occasion, Mr. Arvind Kumar, General Manager Marketing, Dharampal Satyapal Foods Limited said, “Maa Kehti Hai is a digital campaign that epitomizes and honours the depth of a mother’s love. This campaign carries the legacy of its immensely successful #Maa Kehti Hai campaign and highlights the brand’s theme, “achchai”, celebrating the goodness of the strongest bond in the world; a mother’s unconditional love and selflessness at its finest. It is this achchai and purity of emotion that never diminishes with time that we wanted to capture in the film.”

Chraneeta Mann, Co-founder at The Mob says, “The film plays with many emotions. The emotions of a son who has grown into the role of a parent for his ageing mom. The emotion of a mom who despite her fading memory, listens to her maternal instinct and reaches out to connect with her son in his time of need. The purity of goodness in this script is what connects to the purity of goodness that Rajnigandha Silver Pearls has stood for.”