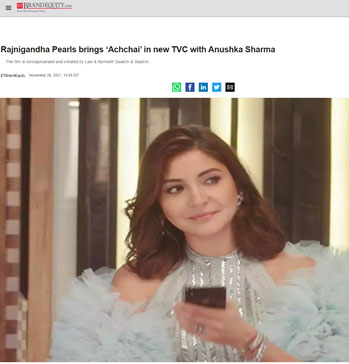 The film celebrates compassion and human kindness. The TVC showcases how a small act, even done anonymously, can bring a smile on somebody’s face. The campaign showcases Sharma in a real life scenario performing an act of goodness. She takes a few moments out of her busy life to perform a selfless act that makes someone less fortunate comfortable, the company said in a press statement.

Arvind Kumar, general manager, marketing, DS Confectionery Products, said, “The brand story of Rajnigandha Pearls is built on the premise of ‘Goodness that shines’ or ‘Achahai ki ek alag chamak hoti hai’, which articulates the goodness of great tasting product coated with shining silver. The new campaign weaves a story on the brand’s philosophy reinforcing the message and depicting selfless goodness that shines through the smallest of acts of kindness to spread joy around.”

The film conceptualised and created by Law & Kenneth Saatchi & Saatchi, opens with Anushka Sharma shivering in cold and walking down the stairs of the lobby of a luxurious residential building in a cold winter night. The drowsy and shivering guard stands up to greet the Bollywood diva. When asked if it was cold and that the night was also long, the guard responds sheepishly. She smiles and thoughtfully walks into the elevator that would take her to her apartment floor.

While in the elevator, she gazes at the security guard, smiles and taps her phone to place an online order for hot tea and snacks to be delivered anonymously to the guard. The guard is pleasantly surprised to have a delivery guy bring him the packet of much needed tea with goodies for him without a mention of the benefactor. The film ends with Sharma recalling her grandmother’s definition of real goodness - ‘Achchai ek haath se karo to doosre haath ko pata bhi na chale’.

The integrated 360 degree campaign is being launched on various media vehicles, using different touch points in the consumer ecosystem.