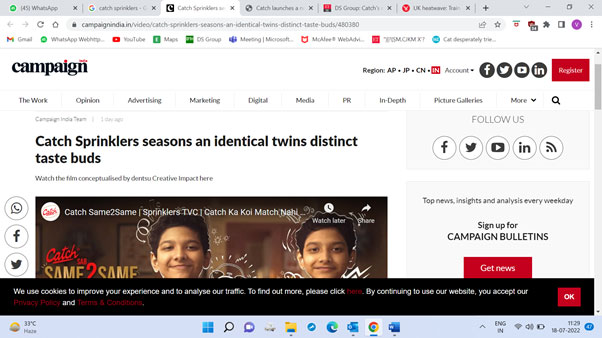 DS Group has rolled out a campaign for Catch Sprinklers that has been conceptualised by dentsu Creative Impact. The film features two identical twins. It showcases how the twins are identical in every facet of their life, be it the way they dress up, the movies they like to watch, the sports they like to play, and the food they like to eat and enjoy. The film, however, showcases that when it comes to food and seasoning their palates have a distinctive taste. The voice over at the end of the film narrates, ‘you may be the same in all aspects, but your taste will always differ’ highlighting the brand's proposition of having a match for every taste bud. Sandeep Ghosh, business head, DS Spiceco, said, “The flagship product of Catch, the sprinklers have enjoyed leadership in the category since its launch in the year 1987. The new commercial will further consolidate Catch’s leadership position in the tabletop category, which has expanded over the years and has a variety of salts, pepper and blends today. A taste enhancer for every palate indeed.” Anupama Ramaswamy, managing partner and national creative director, dentsu Impact, said, "Who uses sprinklers? Someone who wants something extra in existing food. Now that’s simple. From here came the insight of how people may be similar, but when it comes to the food and taste, people may be different. And how can we show this behaviour using a visual mnemonic which is memorable? So there came the creative device of twins. We all know twins are same in most aspects. Except when it comes to taste. Of course, shooting with identical looking kids was challenging, particularly when it comes to the exact reactions. But I must say, it was a commendable job done by the director Gaurav and the entire team at Good Morning Films.” Hindol Purkayastha, executive vice president, dentsu Impact, “I can already see this campaign winning hearts among the TG. It is going to break the clutter, and I am quite confident that this will create a new mark in the sprinklers’ category. May be set a new trend of ‘how to beautifully use twins in communications.” CREDITS: Agency: dentsu Creative Impact Client: DS Spiceco Brand: Catch Sprinkler Production house: Good Morning Films Director: Gaurav Gupta Executive producer: Prasanna Naik Producer: Vikram Kalra Creative team: Anupama Ramaswamy - managing partner, Nishit Shankar - senior creative director, Kanishka Singh - group head (copy) Account management team: Hindol Purkayastha - executive vice president, Navin Singh - vice president Strategic planning: Pratyush Sharma - director Films department: Suprotim Dey - technical consultant (films production), Aamir Khan - associate director, Swapnil Kulkarni - agency producer Source: Campaign India