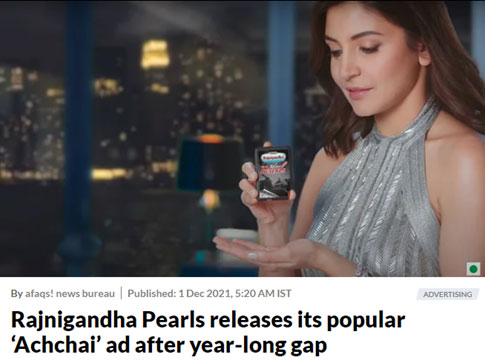 The brand has consistently released an ad, as a part of this campaign every year since 2014. However, this is the first time that its ad is appearing after a year-long gap. Conceptualised and created by Law & Kenneth Saatchi & Saatchi, this film is along the same lines as the previous ones, and celebrates compassion and kindness.

The film opens with Sharma shivering and walking down the stairs of a residential building on a cold winter night. When the drowsy and shivering guard stands up to greet her, she asks him if it is cold. The guard nods sheepishly. Soon, we see a food delivery boy giving him tea with goodies, without a mention of the benefactor. The film ends with Sharma recalling her grandmother’s definition of real goodness, ‘Achchai ek haath se karo to doosre haath ko pata bhi na chale’. It shows how a small act, even done anonymously, can bring a smile to somebody's face.

Arvind Kumar, general manager, marketing, DS Confectionery Products, said, “The brand story of Rajnigandha Pearls is built on the premise of ‘Goodness that shines’ or ‘Achahai ki ek alag chamak hoti hai’, which articulates the goodness of great tasting product coated with shining silver. The new campaign weaves a story on the brand’s philosophy, reinforcing the message and depicting selfless goodness that shines through the smallest of acts of kindness to spread joy around.”

The brand has depicted this same philosophy through its campaigns over the years. It is the background score ‘Dil bada to tu bada’ that binds them together. From 2014-18, Priyanka Chopra was its brand ambassador and featured in the campaigns.

In the 2014 film, we saw her acknowledging everyone who’s been a part of her journey.

In 2015, we saw how a small gesture from her made a difference.

The 2016 film showed how she does little acts of kindness without expecting anything in return and, yet, receives love from her fans.

The 2017 film showed her applauding an artiste’s performance, while most other guests were too busy to notice.

Later that year, she did her last film for the brand.
In 2019, the brand roped in Sharma, who was seen supporting her colleagues in a fashion show.