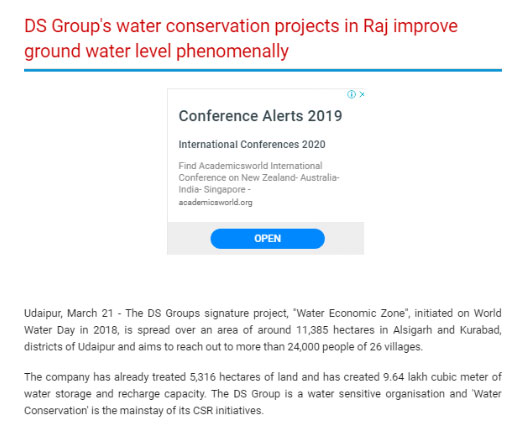 The DS Groups signature project, "Water Economic Zone", initiated on World Water Day in 2018, is spread over an area of around 11,385 hectares in Alsigarh and Kurabad, districts of Udaipur and aims to reach out to more than 24,000 people of 26 villages.

The company has already treated 5,316 hectares of land and has created 9.64 lakh cubic meter of water storage and recharge capacity. The DS Group is a water sensitive organisation and ‘Water Conservation' is the mainstay of its CSR initiatives.

The company is committed to improve water security in areas identified as critical and water vulnerable with a focus to improve water table of the areas for agriculture, thus improving the livelihood prospects of the community. DS Group commissioned its first water conservation project in Sikar in 2013 and has since constructed 23 check dams in Deepawas Mokalwas & Ajeetgarh villages in Sikar district. The Company has also developed water conservation projects in Mahoba and Banda in Bundelkhand; Surata in Dungarpur; Karauli; and the ‘Water Economc Zone at Kurabad and Alsigarh in Udaipur.

The DS Group has already saved around 20,83,855 cubic meter of water till date in Rajasthan, covering 617 hectares and impacting about 33,000 lives.According to the Central Water Commission, India needs a maximum of 3,000 billion cubic metres of water a year while it receives 4,000 billion cubic metres of rain. The country captures only 8 per cent of its annual rainfall, which is amongst lowest in the world leading to , the scarcity of water .

Water scarcity is a big problem, particularly in Rajasthan. It has 13.88 per cent of India's cultivable area, 5.67 per cent of population and about 11 per cent of country's livestock. But it has only 1.6 per cent of surface water and 1.70 per cent of ground water. The water conservation projects will significantly improve the social and economic conditions in the state.The Company is also conscientious about water conservation in its operations and the Company's headquarter situated in Noida is Zero Discharge facility, nine recharge pits for water harvesting, reusing RO water discharge, Effluent and Sewage Treatment Plants are few such initiatives that has aided this drive.

The water discharge from the cooling tower, Effluent Treatment Plants and Sewage treatment plants are treated and re-used for horticulture.The water taps in the washrooms have been fitted with aerators to reduce water flow rate to 3.18 Litre per Minute (LPM) from 13 Litre per Minute (LPM). All the water closets have been adjusted to reduce water flushing from 9 litres to 7 litres.

Recycling and reuse strategy allowed DS Group deploy 301,644 KL of water for flushing, gardening and irrigation. About 91,400 KL rain water is collected in ponds and used for irrigation purpose. And, about 15,044 KL rain water is harvested through rain water harvesting pits at headquarters in Noida.