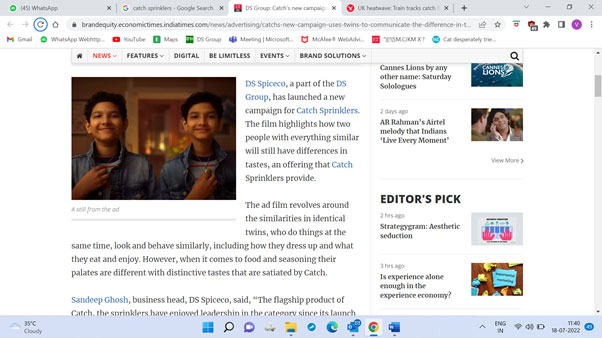 The film highlights how two people with everything similar will still have differences in tastes, an offering that Catch Sprinklers provide.

DS Spiceco, a part of the DS Group, has launched a new campaign for Catch Sprinklers. The film highlights how two people with everything similar will still have differences in tastes, an offering that Catch Sprinklers provide. The ad film revolves around the similarities in identical twins, who do things at the same time, look and behave similarly, including how they dress up and what they eat and enjoy. However, when it comes to food and seasoning their palates are different with distinctive tastes that are satiated by Catch. Sandeep Ghosh, business head, DS Spiceco, said, “The flagship product of Catch, the sprinklers have enjoyed leadership in the category since its launch in the year 1987. The new commercial will further consolidate Catch’s leadership position in the table top category, which has expanded over the years and has a variety of salts, pepper and blends today.”

Anupama Ramaswamy, managing partner and national creative director, Dentsu Impact, said, "Who uses sprinklers? Someone who wants something extra in existing food. Now that’s simple. From here came the insight of how people may be similar but when it comes to the food and taste, people may be different.” “How can we show this behaviour using a visual mnemonic which is memorable? So there came the creative device of twins. We all know twins are the same in most aspects except when it comes to taste. Shooting with identical looking kids was challenging particularly when it comes to the exact reactions, but I must say, it was a commendable job done by the director Gaurav and the entire team at Good Morning Films,” she added. Hindol Purkayastha, executive vice president, Dentsu Impact, said, “I can already see this campaign winning hearts among the TG (target group). It is going to break the clutter and I am quite confident that this will create a new mark in the sprinklers’ category, setting a new trend of ‘how to beautifully use twins in communications’."